In the automotive world, few companies have a history as rich and storied as Mini Cooper. This tiny tour-de-force has been taking the world by storm since 1957, and shows no signs of slowing down in popularity. Let’s take a look at the long history behind the short car.

Birth of a Tiny Giant– The year was 1957, and in England, fuel prices were skyrocketing due to the Suez Crisis. This spelled disaster for owners of the large, gas-guzzling vehicles which were the standard in post-WWII Britain. Sir Leonard Lord at the Morris Company saw what was happening with out-of-control gas prices and challenged his number-one engineer, Alec Issigonis, to design and build a compact, fuel-efficient car which could carry four adults, priced affordably enough for nearly everyone to buy. Issigonis was able to hit upon an innovative design that maximized passenger space by pushing the wheels to the very corners of the chassis, while also turning the engine sideways to increase stability in even the tightest turns. Thus, the Mini was conceived, and the face of the automotive industry was about to be changed forever.

Mini Meets the Public– In 1959, when the first Mini was launched, consumers didn’t exactly know what had just hit them. But one thing was certain- they knew they liked it! The stark difference between the Mini and literally every other car on the market at that time cemented its place as an iconic British piece of pop culture, and became as much of a symbol of the irreverent, independent 1960s British youth culture, as the Beatles, peace signs and go-go boots. One of the most important features of the Mini was that virtually everyone could afford one. This class-defying vehicle served as a unifier between people from many distinctive backgrounds and socioeconomic levels, creating a kind of vehicular Utopia in which movie stars and mailmen could all enjoy the fun and excitement of driving a Mini. 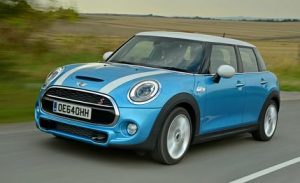 Mini Cooper is Born– In 1961, British racing legend John Cooper helped engineer a Mini with a more powerful engine, bigger brakes and some tuning upgrades, which resulted in the Classic Mini Cooper 997. This souped-up Mini became a rally racing champion of an automobile, and continues to demonstrate its giant-slaying abilities at pro rallies today, including the world-famous Monte Carlo Rally.

Mini Cooper Today– After being one of the most celebrated and iconic vehicles in British history, the last Classic Mini rolled off the assembly line in October 1999. But that was far from the end for this little auto that could- the redesigned Mini Cooper went on to gain worldwide renown and beloved status, and was finally made available in the U.S. for the first time since the late 1960s. The Mini Cooper has been featured in numerous movies including The Italian Job and Austin Powers in Goldmember, further cementing its place in pop culture history. One thing is for certain- the Mini Cooper isn’t going anywhere soon.

For the very best in quality Mini Cooper service and repair in the Manchester, MO area, Autos of Europe has you covered. Call us today to schedule your Mini’s appointment for routine maintenance or repair.